Static Electric Accumulation
Electrostatic charges typically leak from a charged body because they are under the attraction of an equal but opposite charge. Thus, most static sparks are produced only while the generating mechanism is active. However, some refined petroleum products have insulating qualities and the charges generated during movement will remain for a short period of time after the product has stopped moving. This accumulation, rather than dissipation, is influenced by how well the bodies are insulated with respect to each other. Since air or air/vapor mixtures are often the insulating body between the opposite charges, both temperature and humidity are factors in this insulation. Thus, very low or high temperatures, with resulting low humidity, will increase the accumulation of the electrostatic charge both while it is being generated and during the normal relaxation period.

Ignition by Static Electricity
As a result, once a means of generating and accumulating an electrostatic charge exists, it will be a source of ignition under the following three conditions:

Cumulative Fire
Cumulative fires are known as the fire caused due to the spark caused by any of the means, i.e , by human error or by not using Intrinsically safe material while at a watch or may be due to any electrical fault.
Once this spark is generated and the fuel is at par or over its ignition point then fire takes place and such fire is very hard to control. 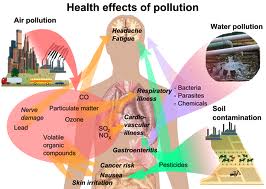 VOC (Volatile Organic Compound) [Trassi Sir's Quotient]
These are the compounds are organic chemicals that have a high vapour pressure at ordinary, room-temperature conditions. Their high vapour pressure results from a low boiling point, which causes large numbers of molecules to evaporate or sublimate from the liquid or solid form of the compound and enter the surrounding air. An example is formaldehyde, with a boiling point of –19 °C, slowly exiting paint and getting into the air.
The ability of organic chemicals to cause health effects varies greatly from those that are highly toxic, to those with no known health effects. As with other pollutants, the extent and nature of the health effect will depend on many factors including level of exposure and length of time exposed. Eye and respiratory tract irritation, headaches, dizziness, visual disorders, and memory impairment are among the immediate symptoms that some people have experienced soon after exposure to some organics. At present, not much is known about what health effects occur from the levels of organics usually found in homes. Many organic compounds are known to cause cancer in animals; some are suspected of causing, or are known to cause, cancer in humans.

Allergies and Other Health Problems

A perceived health concern from inhaling gasoline vapors is the potential for carcinogenicity based on the induction of kidney tumors in male rats and liver tumors in female mice exposed to wholly-vaporized gasoline. However, the results of the animal stud ies are of questionable relevance for human risk assessment due to the unique mechanism operative only in the male rat and since the exposure was to wholly-vaporized gasoline rather than the gasoline vapor mixture to which humans are exposed.
Recent research supports the hypothesis that branched-chain alkanes bind to a globulin specific to make rats, alpha 2-u-globulin. The protein complex can not be degraded in the usual manner so that protein accumulation occurs in renal cells, leading to cytotox icity, death, proliferation, and with prolonged exposure, kidney cancer. The results of epidemiology studies fail to link an increase in cancer to exposure to gasoline vapors. 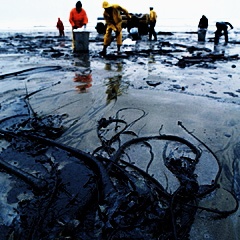 Pollution can be of two kinds due to petroleum, i.e Air pollution and Water Pollution.

Air Pollution
It covers mostly the things such as the fumes and toxic vapours that are generated by the fuel when carried in bulk such as in Tankers.
Also these high pressure vapours are released in fresh atmospheric air and there they remain suspended.
Thus a Hazard.
Further Informative Read ( Must Read)
Air Pollution Slides

Oil Spills Damage Beaches, Marshlands and Fragile Marine Ecosystems
Oil spilled by damaged tankers, pipelines or offshore oil rigs coats everything it touches and becomes an unwelcome but long-term part of every ecosystem it enters.
When an oil slick from a large oil spill reaches the beach, the oil coats and clings to every rock and grain of sand. If the oil washes into coastal marshes, mangrove forests or other wetlands, fibrous plants and grasses absorb the oil, which can damage the plants and make the whole area unsuitable as wildlife habitat.Oil-covered birds are practically a universal symbol of the environmental damage wreaked by oil spills. Any oil spill in the ocean is a death sentence for sea birds. Some species of shore birds may escape by relocating if they sense the danger in time, but sea birds that swim and dive for their food are sure to be covered in oil.Oil spills frequently kill marine mammals such as whales, dolphins, seals and sea otters.Oil spills often take a deadly toll on fish, shellfish and other marine life, particularly if large numbers of fish eggs or larvae are exposed to the oil.The long-term damage to various species, and to the habitat and nesting or breeding grounds those species depend upon for their survival, is one of the most far-reaching environmental effects caused by oil spills.
Other Enviromental Hazards
Click on it...
Tank Washings cause severe Enviromental Hazards