How Does An Air Ejector Work?

How Does An Air Ejector Work?
written by: Ricky • edited by: Lamar Stonecypher • updated: 6/17/2010
An air ejector or steam ejector is a device which uses the motion of moving fluid (Motive Fluid) to transport another fluid (Suction fluid). It is has a wide range of application in steam ejector in boiler condenser, fresh water generator and in priming the centrifugal pump.
Air Ejector Theory
It works on the principle of convergent /divergent nozzle as it provides the venturi effect at the point of diffusion as the tube gets narrows at the throat the velocity of the fluid increases and because of the venturi affect it pressure decreases, vacuum will occur in the diffuser throat where the suction line will be provided.

As in convergent nozzle the following effect takes place,


P1-pressure of the fluid entering the nozzle.

V1- velocity of the fluid entering the nozzle.

P2- pressure of the fluid leaving the nozzle.

V2- velocity of the fluid leaving the nozzle. 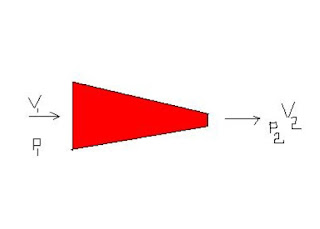 Divergent nozzle the opposite effect takes place velocity energy is convert into pressure energy, at the point of diffusion there is a low pressure or vacuum is created which is used to suck the other fluid for the motion.

In the fig: C- Convergent Nozzle.

Email ThisBlogThis!Share to TwitterShare to FacebookShare to Pinterest
Labels: general, how to, marine engineering, MEOL