Do you know who are they?
They are Sodium (Na) and Vanadium (Va).
They cause, High Temperature Corrosion! 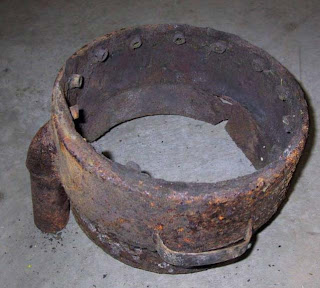 Their love for each other is so strong that we, the engineers onboard have to face certain problems due to them.
Generally, in heavy fuel oil,
Sodium= 200ppm
Vanadium= 600ppm
Na/V ratio in fuel oil is 0.08-0.45, where 0.15-0.30 being the most dangerous ratio.
When the engine combustion is going on, then Na and Va form v2o5 and na2o.
Also, Sulphur (s) (presence 0.6%-3.8% in fuel) reacts with v2o5 to form other by products.
HT Corrosion is caused at the temp over 500 deg C.
These compounds solidify on the surface of the metal and thus tend to release oxygen molecule, this forms cavity and expose fresh metal surface (which is vulnerable to more corrosion).
This released oxygen molecule reacts with more of na, va compounds and produces more cavities at around 530-600 deg C.
And the cycle goes on causing more and more deposits on the metal surface and thereby causing it to deteriorate and corrode. 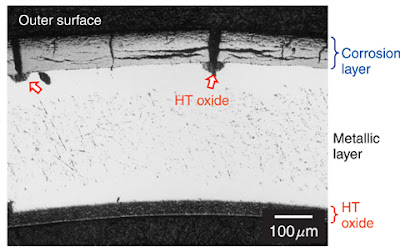 In the above mechanism, Sulphur dioxide (so2) adds more horror, see how...

na2so4 (sodium sulphate) does not remain in molten form, they solidify and release more na2o which further reacts with v2o5 to form sodium vanadates to attack further metal.

These vanadates are active at temp over 593 deg C, below that they are solid form.

so3 combines with sulphurous deposits and thus form thick dark deposits on the metal surface and damage the protective oxide layer form the metal's surface.