It was a fine Saturday morning and we were cycling amidst plush greenery channel near Dwarka region of New Delhi.
It was a good 2 hour ride (ofcourse bicycle ride) in which 30.4 km were covered. During this event,w e explored a new exciting place which is less known to the people due to its isolated location.
Its a camp site developed and maintained by Delhi Govt but not promoted by any means for what ever reason. For a video walkthrough, visit following link, https://youtu.be/XmLaC2-1oaU .

Every was going through like a breeze..Until this happened,

It was nearly 27 km of journey by now, when we were (4 cyclists) at sector 12 Crossing and we heard a 'boom' sound. I looked around and saw, a white maruti celerio car flipping around until its head light got swapped by its tail light.

A shocked lady in white, WEARING HER SEATBELT, was trying to recollect her senses!

We rushed to her and asked if she was ok. She said,"almost".
I guided her to park her car at a safe place. Comforted her with reassurances that she's ok and everything is fine.
Her car suffered some damages at the rear and axle bent. She called up her husband to inform followed by police.
She reported that she was returning post dropping her kid to the school. Fortunate kid was not in the celerio at this time. #goodkarma pays like this. 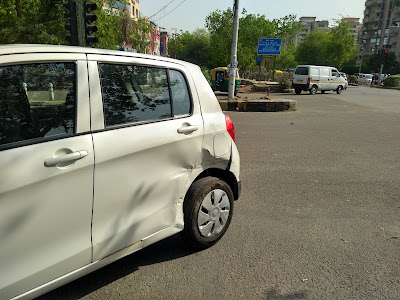 It was her lucky day that all the impact was tolerated by the rear left tyre and axle thus leaving lesser strain on the car's structure otherwise the vehicle could have capsized then and there.
Scratching your head for capsized??? Don't worry it means inverted in layman's term. Thank me later!

She said,"my mind is not working. my phone is not working properly. would you please take pictures of the car at sight of accident for insurance purpose and send me through whatsapp".
I said," ofcourse mam" and did the needful.
Point to notice here is that, she was well aware of her duties even in such a scenario.

This car was hit by a vehicle at such a high speed that we couldn't even register the scenario. Well some good passers by later told it was a brown Mahindra XUV which jumped over the traffic signal at high speed.
He fled away...But as #karma plays it role, during the impact his car's registration plate fell at the sight of the accident. Isn't it funny??? No its not funny. But, yes he would be caught soon and I hope strict action could be taken against that scoundrel for such an act.

Had it been the case that this guy would have stopped somehow, he would have got beaten to his heart's content by us, believe me...We wouldn't have waited for police to take action. Sorry to say that but that's what should be done!

If you know what to do even in theory, then you would be in a better situation in worst times also.Now by the means of this article, one can easily figure out, how important it is to be trained for emergency situation.

For getting trained for life's emergencies and learning life skills such as fire safety, electrical safety and medical first aid, drop in a message to facebook.com/meosuccess and we will contact you to customize your training as per your needs.

"Because in an emergency, help arrives a little too late..." 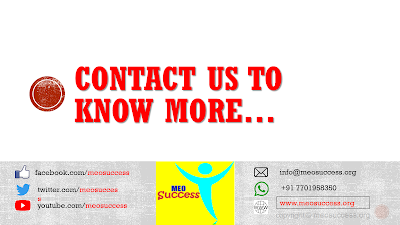